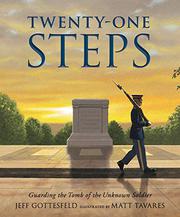 Guarding the Tomb of the Unknown Soldier

An up-close look at the sentinels who protect and honor America’s fallen.

“I am an Unknown. I am one of many.” Instantly personal, instantly heart-rending. The unnamed, unknown soldier in the tomb at Arlington National Cemetery tells this story. World War I took not only the lives of many, but, tragically, their identities as well. “Nameless and faceless” heroes were impossible to reunite with loved ones. Families were unable to properly mourn. In 1921, one soldier was chosen to represent the Unknowns. Gottesfeld’s text, spare and shining, gently gives the backstory. But it is the unexpected footsteps—21 to be exact—of the soldier who stands guard and 21 seconds of silence that resound loudly and purely. “With each step, my war was over.” Forearms are kept at 90-degree angles. Hat brims are two finger widths above the eye. The precision of dress and deliberate, smooth actions of the Tomb Guards emanate honor and respect, but the first-person narration shows a personal perspective. A 24-hour guard gives comfort and companionship. “From that moment, I have never been alone again.” Tavares’ magisterial art soars, awash in opposing forces: shadowed but luminous, soaked in both melancholy and reverence. All sentinels (“men and women of every race, religion, and creed”) take this honor seriously, expressed in the “Sentinel’s Creed” reproduced in the frontmatter. The fallen who have died nameless deserve the very best. This is it.