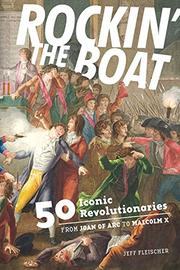 A gallery of historical troublemakers starting with Hannibal and ending with Martin Luther King, Jr.

Fleischer chooses figures who worked, with high visibility but varying levels of success, to overthrow governments, liberate countries from foreign rule or fight for the rights of the oppressed. He arranges his entries by birth date, opens each with an old or period image and spins out career portraits in an occasionally breezy idiom: Julius Caesar’s heir Octavian was “ticked off,” Guy Fawkes was a man “jonesing to fight” Protestantism, and Elizabeth Cady and Henry Stanton were “an activist power couple.” Snarky picture captions (“Emma Goldman is not interested in your nonsense”) and sidebar references to pop culture further lighten the overall tone. Still, the author does not soft-pedal the brutality to which some of his subjects turned, however idealistic they may have started out, or the violent ends to which many of them came. Though the cast is largely European and/or male, it includes such less-well-known male freedom fighters as Metacom (aka King Philip), Maori leader Hone Heke and Daniel Shays and such women as Boudica and New Zealand feminist Kate Sheppard. Suggestions for further reading, a discussion guide and relevant updates will be available online; alas, there are no bibliography or source notes as such, nor is there an index.