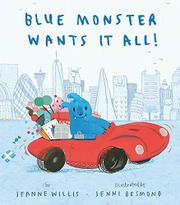 BLUE MONSTER WANTS IT ALL!

A little monster who loves “brand-new things more than anything” has some trouble adjusting to a new baby in the family.

His parents are in the habit of placating him, and when he rejects his teddy bear, his mom and dad give him a baby sister. He’s excited at first, but soon the bloom wears off, and he says, “I don’t want my old sister!...I don’t want my old teddy bear! Or my old mom and dad!” He gathers all the money his grandmother has given him and leaves home to start a new life. Finally, after acquiring a hat, a red sports car, a big golden palace with a carnival and circus, an airplane, and an island, Blue Monster realizes “there are some things money just can’t buy” and returns home. The story covers well-worn territory: Blue Monster is petulant and selfish, and he learns a lesson about the hollowness of things. But Willis and Desmond’s version of this familiar tale has a new energy. Desmond’s splashy, line-and-watercolor illustrations are sassy and humorous: one spread shows the protagonist reclining in a new red sports car—feet in new sneakers and sipping a trendy coffee—and zipping past an international skyline (London’s Gherkin, New York’s Freedom Tower, Seattle’s Space Needle, and the Eiffel Tower, among other structures).

An amusing, over-the-top new-sibling book with echoes of “The Fisherman and His Wife.” (Picture book. 3-6)