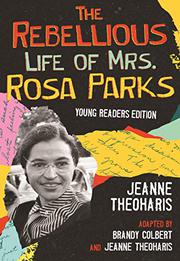 This adaptation of the 2013 adult biography of the same name explores the life and activism of a civil rights icon before and after the incident that made her famous.

Parks, renowned for her role as the catalyst in the Montgomery Bus Boycott, was born into a close-knit African American family in 1913 Alabama. Like others, her family was deeply affected by the restrictions of the Jim Crow South and the legacies of slavery. As a child, Rosa watched her grandfather defend the family from the Ku Klux Klan. Her marriage to Raymond Parks connected two people with shared senses of identity and activism. They became members of the NAACP despite the danger; Mrs. Parks eventually co-founded their branch’s youth council. She was also active in organizing voter registration and attended leadership training at the Highlander Folk School, where she met others working for justice. By December 1955, when she refused to give up her seat on the bus, Parks was already a seasoned activist, and her community had long been engaged in seeking equality in public transportation. Eventually, she and her husband relocated to Detroit, where she continued her advocacy. This detailed, readable narrative refutes the myth of the accidentally significant historical figure, focusing on the totality of Parks’ life as a champion of full citizenship for African Americans as well as the complexities of struggles against White resistance.

A nuanced exploration of a woman with a lifelong commitment to social change.