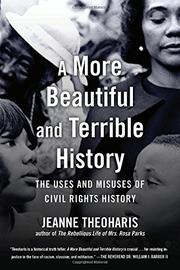 A MORE BEAUTIFUL AND TERRIBLE HISTORY

The Uses and Misuses of Civil Rights History

Theoharis (Political Science/Brooklyn Coll.; The Rebellious Life of Mrs. Rosa Parks, 2013, etc.) argues persuasively that the reality of the civil rights movement has become a benign national fable, invoked by public officials and liberals to assert their “enlightened bona fides” and by critics of activist groups such as Black Lives Matter in an effort to silence them. Central to this fable are distorted images of Rosa Parks, depicted as a quiet, meek woman, and Martin Luther King Jr., whose achievements are attributed to his “loving, nonviolent approach.” As activist Julian Bond once put it, “the narrative of the movement has been reduced to ‘Rosa sat down, Martin stood up, then the white folks saw the light and saved the day.’ ” Theoharis strongly believes that turning the civil rights movement into “museum history” promotes the false idea of “an exceptional America moving past its own racism.” She also points out that racism is not limited to the South; she shows how the “polite racism” of the North “framed resistance to desegregation in the language of ‘neighborhood schools,’ ‘taxpayer’s rights,’ and ‘forced busing.’ ” Denying personal animosity toward blacks, Northerners revealed racism in “silence, coded language, and the demonization of dissent.” Theoharis takes the media to task for their coverage of uprisings in Detroit, Los Angeles, and New York; reporters, she writes, failed to investigate the “racial inequities embedded in their city’s schools, policing, or municipal structures” and presented the violence as a stunning surprise rather than the culmination “of a protracted struggle.” Similarly, she criticizes the movie Detroit (2017) for “completely erasing the history of Black life and activism in the city” before the killings depicted. She also criticizes Barack Obama, who as candidate and president warned black men not to use racism as an excuse for personal failure, thereby diverting focus from civil rights organizing to “inward self-help.” Chronicling the efforts of many activists, the author underscores her message that reform requires courage and hard work.

An impassioned call for continued efforts for change.