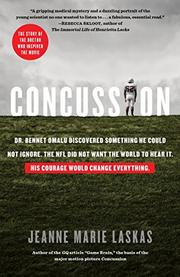 Nigeria-born Bennet Omalu is perhaps an unlikely hero, a medical doctor board-certified in four areas of pathology, “anatomic, clinical, forensic, and neuropathology,” and a well-rounded specialist in death. When his boss, celebrity examiner Cyril Wecht (“in the autopsy business, Wecht was a rock star”), got into trouble for various specimens of publicity-hound overreach, Omalu was there to offer patient, stoical support. The student did not surpass the teacher in flashiness, but Omalu was a rock star all his own in studying the brain to determine a cause of death. Laskas’ (Creative Writing/Univ. of Pittsburgh; Hidden America, 2012, etc.) main topic is the horrific injuries wrought to the brains and bodies of football players on the field. Omalu’s study of the unfortunate brain of Pittsburgh Steeler Mike Webster, who died in 2002 at 50 of a supposed heart attack, brought new attention to the trauma of concussion. Laskas trades in sportwriter-ese, all staccato delivery full of tough guy–isms and sports clichés: “He had played for fifteen seasons, a warrior’s warrior; he played in more games—two hundred twenty—than any other player in Steelers history. Undersized, tough, a big, burly white guy—a Pittsburgh kind of guy—the heart of the best team in history.” A little of that goes a long way, but Laskas, a Pittsburgher who first wrote of Omalu and his studies in a story in GQ, does sturdy work in keeping up with a grim story that the NFL most definitely did not want to see aired—not in Omalu’s professional publications in medical journals, nor, reportedly, on the big screen in the Will Smith vehicle based on this book.

Effectively sobering. Suffice it to say that Pop Warner parents will want to armor their kids from head to toe upon reading it.