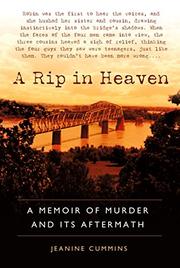 A RIP IN HEAVEN

A Memoir of Murder and its Aftermath

A wrenching tale of a notorious murder’s long echoes for its survivors.

Cummins terms her debut “both a true crime [story] and a memoir,” intending it to celebrate the lives of her young cousins, Julie and Robin Kerry, killed during a chance encounter in the summer of 1991. Traveling with her family from Washington, D.C., to vacation with relatives in St. Louis, Cummins ruefully recalls, “I thought I was tough.” On their last night in St. Louis, her older brother Tom snuck out with Julie and Robin; the rebellious 18-year-old rookie firefighter had developed a deep emotional bond with his cousins, both lovers of poetry and social justice. The trio went to the decrepit Old Chain of Rocks Bridge, where they ran into four local young men whose friendly demeanor quickly turned savage. The men beat Tom, raped Julie and Robin, then pushed all three into the raging Mississippi River. Only Tom survived, and his family’s horror was compounded when investigators inexplicably charged him with his cousins’ deaths. Tom was held for several grueling days before a flashlight found at the scene led authorities to the real killers, who quickly implicated one another. The least culpable accepted a 30-year plea; the others received death sentences. Identifying herself by her childhood nickname “Tink,” Cummins re-creates these dark events in an omniscient third-person narrative that lends the tale grim efficiency. Although her prose is occasionally purple (“Tink’s blood turned to ice and the room started to spin out from under her feet”), she succeeds overall in acquainting the reader with the horrific toll exacted by proximity to violence. The conclusion, which examines how the cruelest of the murderers became a cause célèbre thanks to his youth, offers astringent commentary on our society’s fascination with killers, who in media coverage often overshadow their victims. Cummins’s memoir does a good job of retrieving the lives of Julie and Robin from that obscurity.

Apt tribute to family endurance in the face of grievous loss.