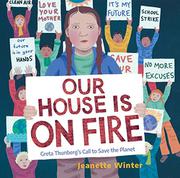 OUR HOUSE IS ON FIRE

Greta Thunberg's Call to Save the Planet

The origin story of the teenage climate change superhero.

Once, as she puts it, “the invisible girl in the back who doesn’t say anything,” Thunberg has, over just the last two years, become a major young presence in the environmental movement, inspiring “Friday school strikes” worldwide and challenging governing bodies to get off the stick: “I want you to panic,” she told the World Economic Forum in Davos. “I want you to act as if the house was on fire. Because it is.” Skipping Thunberg’s personal history aside from characterizing her as one who “could think about one thing for a long, long time” (an ability Thunberg associates with her Asperger’s diagnosis, unnamed here), Winter pithily retraces the course of her transformation. She begins with a teacher’s lecture on climate change and a period of intense reading and video watching and then goes on to show how Thunberg’s lonely Friday picket outside Stockholm’s Parliament building gains local, then international, support. The illustrations, equally spare, often place the white teenager front and center before culminating in a double-page spread filled with children of diverse hues and styles of dress holding up signs reading “Don’t Burn MY Future” and like urgent messages, followed by a direct question in big, cut-out letters: “WHAT WILL YOU DO?” As one sign puts it, “There Is No Planet B” for any of us.

A compact but cogent tribute to a single voice for change that now leads a rising chorus.