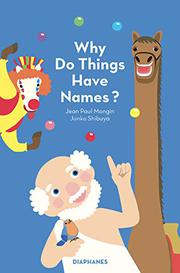 WHY DO THINGS HAVE NAMES?

From the Plato & Co. series

Imported from France, Platonic realism for preteens, introduced by the great philosopher himself.

“Why is a horse called a horse” instead of, say, a giraffe? Or, for that matter, “flapdoodle”? Just to keep this all as far as possible from becoming a weighty discourse, a toga-clad, woolly-bearded White gent—plainly a philosopher—leads a Socratic-style enquiry loosely based on the Cratylus dialogue that sets up and culminates in an elaborate, fantastic pun. He then goes on to explain that “Plato” is a nickname that translates (very freely) as “Muscleman” and challenges readers to find out where their own names come from. Shibuya’s illustrations helpfully sustain the tone with images of onlookers in antique dress and vaguely Grecian settings along with various creatures led by a smirking horse, all set amid multiple flaps, small pop-ups, die-cut holes, and, at the end, a foil mirror. An attempt to make the point that “horse” is not a universal term goes off the rails, being both confusingly phrased and illustrated with a group of riders clad in stereotypical Native American and like ethnic garb. Otherwise, following Ronan de Calan and Donatien Mary’s The Ghost of Karl Marx, translated by Anna Street (2015), and other entries in the Plato & Co. series, this outing may dip barely a toe into its philosophical waters but does at least begin to demystify them. Stylized human figures throughout show mild differentiation in racial presentation and body type.

A quick and comical gallop into the world of ideas.