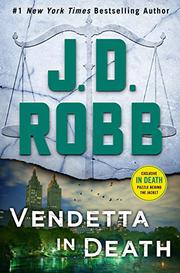 Executive headhunter Nigel B. McEnroy is so “scrupulous, exacting, ethical, and diligent” in running Perfect Placement that you’d never suspect what a pig he was to the women he drugged, raped, shamed, and degraded—unless you were his lawyer, his top lieutenant, or one of those many, many women. So it’s only fitting that an avenger would treat him to a taste of his own medicine, slipping him a drug, bundling him into a car, chaining him up in a secure location, torturing, castrating, and killing him before marking the scene with some self-righteous doggerel signed Lady Justice. The same blow-by-blow treatment awaits Thaddeus Pettigrew, the longtime patron of the high-end escort service Discretion, who cheated his wife out of most of the business she’d built, divorced her, and shacked up with his mistress. Even without the catch-me-if-you-can signature, it would be obvious to Eve (Connections in Death, 2019, etc.) and her partner, Detective Delia Peabody, that the two murders are the work of a single hand and equally obvious that there are likely to be more. But where to look for Lady Justice in a world in which every woman who knew about the victims’ sins would have cheered their passing? Ex-wife Darla Pettigrew’s links to the activist/social work circle Women For Women seems to promise a smaller roster of more likely suspects. Now if only the WFW founder, licensed therapist Natalia Zula, hadn’t insisted on confidentiality for all its participants and restricted her own notes to using first names, none of which happen to be Lady.

A rousing futuristic hunt for a serial killer of victims no one will mourn.