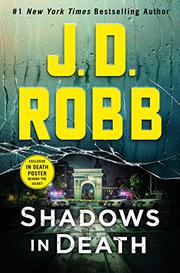 The savage gutting of a wine-and-spirits heiress in Washington Square Park brings Lt. Eve Dallas up against a baleful killer with both eyes firmly fixed on her husband and his family.

Wine distributor Jorge Tween shows so little emotion over the death of Galla Modesto, the wife he obviously married for her family’s money, that Eve and her partner, Detective Delia Peabody, instantly conclude that he’s behind her death. Since his home-monitoring system gives him a cast-iron alibi, it would be clear that he hired a contractor even if Eve’s husband, Roarke, hadn’t recognized a balefully familiar figure first staring at him, then running from the crime scene. The hit man is Lorcan Cobbe, an enforcer for Roarke’s late mobster father back in Dublin who’s convinced that he’s Patrick Roarke’s illegitimate son and that the billions Roarke made before and after he walked away from crime to marry Eve ought to be his. “This is almost too easy,” says Peabody, and she’s absolutely right. Once Eve and Peabody, in the most predictably entertaining sequence of this installment, have extracted a confession from Tween, it’s all Cobbe, all the time. Although the presumed killer has been a suspect or a person of interest in no less than 443 murders, his obsession with destroying Roarke and his relatives seems to lead him to act as incautiously and amateurishly as his client, and with a lot less excuse. Even the final sequence, in which Eve and Roarke take down the allegedly indestructible Cobbe, then turn him loose so that the two ancient antagonists can duke it out with bare fists, is comically anticlimactic.

For readers who dream of hit men whose barks are worse than their bites.