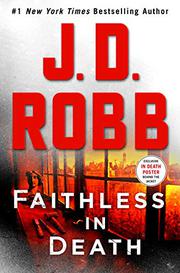 Lt. Eve Dallas follows the path from the murder of a West Village sculptor to a fearsomely powerful cult.

Dallas and Detective Delia Peabody’s snap forensic analysis in the apartment of Ariel Byrd suggests that the young woman enjoyed wine and sex shortly before she was beaten to death with her own mallet. The absence of a condom or any trace of seminal fluids suggests that her final partner was a woman—perhaps Gwendolyn Huffman, the friend who’d had an appointment to sit for a sculpture. Dallas and Peabody, who take against Gwen from the get-go, derive particular pleasure from attacking the tissue of lies she fed them during their first encounter, and their second, in one of the New York Police and Security Department's interrogation rooms, breaks her wide open. But Gwen didn’t kill her lover; that job seems to have fallen to a member of Natural Order, the cult the Rev. Stanton Wilkey founded with significant financial backing from Gwen’s wealthy parents. Natural Order had counted on Gwen’s ability to lure her fiance, millionaire attorney Merit Caine, into their clutches, and when Ariel threatened the impending nuptials, one of them took her out. But which one? As Dallas and Peabody see in a visit to the cult’s closely guarded compound, Wilkey runs a tight ship, and it’s hard to believe that any of his underlings would have gone freelance without authorization from their racist, misogynistic, anti-gay, rapist master. As the franchise heroine squares off against an outsize villain who ticks all the anti-social boxes, readers around the world will be united in their absolute certainty about what’s coming next.

It’s as if Robb armed Offred, gave her backup, and turned Margaret Atwood’s dystopian fable into a comic book.