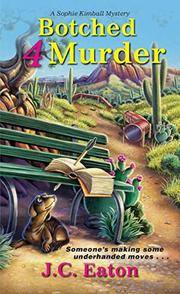 Balancing the books takes second place to a murder investigation.

Phee Kimball is the accountant for Williams Investigations. Her boss, Nate Williams, is a former Minnesota police detective; his assistant, Phee’s boyfriend, Marshall, is another refugee from the frozen north. The upside of living in the Phoenix area is the warm, sunny weather; the downside is proximity to Phee’s mother, Harriet, who lives in Sun City West with a neurotic Chiweenie and is surrounded by a bunch of daffy friends. Although the murder cases her mother dragged her into (Staged 4 Murder, 2018, etc.) have revealed Phee’s gift for detection, she’s not thrilled when another problem comes up. It seems that Sun City West resident Sorrel Harlan is in favor of turning two of the golf courses into eco-friendly parks everyone can use. Most of the residents are horrified, since the place is a golf community, and nongolfers are worried about property values. Following threats hurled at a contentious meeting, the board decides to consider the proposal and vote in a month. Harriet’s friend Myrna is so bad at bocce ball that she’s ready to believe she’s killed someone on the nearby golf course with a wild throw. The deceased is, of course, Sorrel, who has an arrow through her neck and legions of people angry with her. The list of suspects is so long that the police hire Williams Investigations to help, and Phee, egged on by her mother and her friends, can’t resist using her connections to snoop around. Although the residents are all suspects, Sorrel had a number of other activities that may have made her enemies, and there’s always the husband. Even though Marshall constantly warns her to be careful, Phee can’t stop sleuthing, and her investigation leads to clues that may be the death of her.

Eaton serves up enough curveballs to make the mystery admirably complicated, but there aren’t as many giggles as in his heroine’s last case.