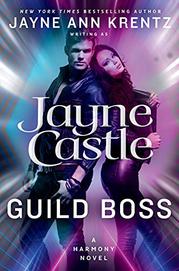 A blacklisted weather reader on the colony world of Harmony reluctantly partners with the notorious Ghost Hunter who saved her from the Underworld once upon a time.

Lucy Bell doesn't remember how she woke up in the strange alien underground beneath Illusion Town after leaving a friend's wedding, but she's wholeheartedly convinced there was foul play at work. Of course, as soon as handsome Ghost Hunter Guild boss Gabriel Jones shows up with a box of pizza in hand, she lets him in long enough to allow him to help her escape the daunting magical maze. As far as the rest of Harmony is concerned, Lucy's got no one to blame for her misfortune but herself, and all her attempts to convince friends, family, and doctors that she must have been kidnapped fall on deaf ears. Her professional reputation as a weather reader crumbles, and her one reliable witness—Gabriel—instantly disappears. When the Ghost Hunter strolls back into her life, later on, Lucy is understandably less than thrilled to see him again, but he's returned seeking her help this time around. He's got a job that requires a woman of her unique abilities, and maybe, deep down, he's trying to reconnect with her, too—because he's been thinking about her ever since he left all those months ago. Castle returns to her Harmony series for an engaging adventure in which a love story and a whodunit go hand in hand, as Gabriel and Lucy have to team up not only to uncover the truth behind her abduction, but to learn the identity of the person—or persons—responsible for trying to take down Illusion Town's primary energy source. The mystery often proves more absorbing than the romance, but all of the ingredients in this newest installment, as well as its resolution, are sure to satisfy longtime fans of the series.

Romance, mystery, and dust bunnies abound in this solid addition to a long-running series.