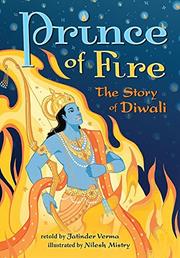 The Story of Diwali

A slightly revised version of a picture book (The Story of Divaali, 2002), this is presented more appropriately as a chapter book for “confident readers.”

The tale of Rama, the titular Prince of Fire, and his bride, Sita, has been retold for centuries, starting with Valmiki’s epic poem, the Ramayana. In an adaptation informed by Tulsidas, a 16th-century poet, Verma, who grew up in East Africa and the United Kingdom and learned the story from his parents, creates a smoothly written tale of adventure and sacrifice. Rama and his brother Lakshmana fight against Ravanna, the Demon King, to win back Sita, with the assistance of Hanuman, God of the Wind (sometimes known as the monkey god), and Jatayu, King of the Birds. When Rama conquers Ravana, he wins back his bride and brings light back to his kingdom, Ayodhya. That legendary feat is celebrated annually as people set up diwas (small pottery bowls with lit wicks) and electric lights to welcome Sita (and her avatar, Lakshmi, the goddess of wealth) back from the world of darkness. In this edition, the explanation of Diwali (an alternative spelling) compares the holiday not only to Christmas, but to Hanukkah and Eid as well. Mistry’s gouache illustrations are done in the ornate style typical of Hindu religious paintings and posters.

One of the world’s essential texts, presented in an accessible manner.