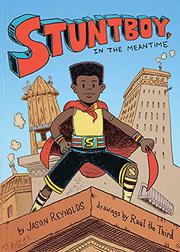 STUNTBOY, IN THE MEANTIME

by Jason Reynolds ; illustrated by Raúl the Third

Not-so-secret superhero by day and kid from apartment 4D by day as well, Portico “Stuntboy” Reeves will need all his tricks to withstand the great threat facing his family and the anxiety that comes with it.

Portico loves living in Skylight Gardens, an apartment complex as large as a castle, but he cherishes the people and community the most—with the exception of Herbert Singletary the Worst. Herbert is a bully and often a source of Portico’s “frets,” or debilitating anxiety, but neighbor and bestie Zola provides great support to both Portico and his super alter ego. The latter’s purpose is to keep all the other uniquely heroic folk in Skylight Gardens safe through an arsenal of self-sacrificing distractions and awkward hijinks. Raul the Third’s illustrations are both dynamic and cleverly slapstick as Portico skillfully tumbles down stairs to prevent an older resident from falling or flops in front of his parents to momentarily stop them from fighting. Reynolds’ narrative gradually reveals the impact Portico’s parents’ impending separation is having on their deeply sensitive son even as he can’t fully grasp what’s going on around him. Superlative, action-packed art and cheeky narration combine to tell a story of emotional intelligence on a superheroic scale while remaining consistently funny and undeniably thoughtful. Most characters read as Black.

A boy finds a creative coping mechanism in this original tale that speaks to the heart.