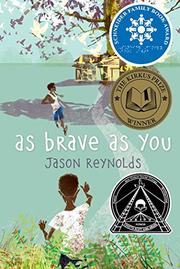 AS BRAVE AS YOU

Eleven-year-old Brooklynite Genie has “worry issues,” so when he and his older brother, Ernie, are sent to Virginia to spend a month with their estranged grandparents while their parents “try to figure it all out,” he goes into overdrive.

First, he discovers that Grandpop is blind. Next, there’s no Internet, so the questions he keeps track of in his notebook (over 400 so far) will have to go un-Googled. Then, he breaks the model truck that’s one of the only things Grandma still has of his deceased uncle. And he and Ernie will have to do chores, like picking peas and scooping dog poop. What’s behind the “nunya bidness door”? And is that a gun sticking out from Grandpop’s waistband? Reynolds’ middle-grade debut meanders like the best kind of summer vacation but never loses sense of its throughline. The richly voiced third-person narrative, tightly focused through Genie’s point of view, introduces both brothers and readers to this rural African-American community and allows them to relax and explore even as it delves into the many mysteries that so bedevil Genie, ranging from "Grits? What exactly are they?" to, heartbreakingly, “Why am I so stupid?” Reynolds gives his readers uncommonly well-developed, complex characters, especially the completely believable Genie and Grandpop, whose stubborn self-sufficiency belies his vulnerability and whose flawed love both Genie and readers will cherish.