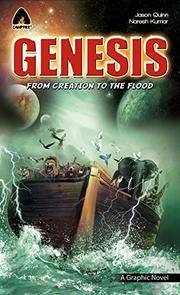 From Creation to the Flood

From the Campfire Graphic Novels series

A compressed version of the first nine chapters, in comics format with an occasional mighty KRAK-KOOM! to signal divine displeasure.

From swirling Creation to a post–Great Flood “peaceable kingdom” scene, the three main stories that open Genesis receive theatrically melodramatic treatment. Appearing simultaneously side by side, Adam and Eve—the latter elegantly coiffed and manicured—stand in discreet poses until they eat the forbidden apple (“My work here isss done,” hisses the Serpent—a green lizard-man possibly copped from R. Crumb’s Book of Genesis Illustrated, 2009). KRAK-KOOM! Next comes jealous Cain murdering Abel in fountains of gore. KRAKA-BOOM! Finally, Noah reluctantly leaves his formerly sneering neighbors to drown as rains come pouring down. KRAAAKKKOOOOM! Kumar’s figures and landscapes are drawn and colored with clean naturalism, laid out in easy-to-follow panels that vary in size and placement. God manifests only as oratorical quotes or paraphrases printed in orange all-caps within glowing dialogue balloons. Everyone else sports light hair and blue eyes (Cain’s go brown in some scenes). As paired animals cluster around Noah’s burning offering at the end, one lion looks back up at viewers with a twinkle in her eye. Quick accounts of other tales from Genesis as well as flood myths from other traditions follow, along with part of the first family’s family tree.

Timeless tales retold with a touch less solemnity than usual.