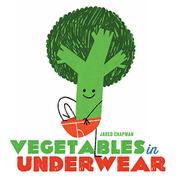 A survey of underwear and opposites is leavened (as if talk of underwear needs to be made funnier) by anthropomorphized veggies.

There’s not much story here, though for kids who giggle at the merest mention of unmentionables, that won’t be an issue. Basically, a stalk of broccoli sheds his shirt and shorts on the copyright and dedication pages and then launches into a spiel about underwear. “I wear underwear! / You wear underwear! // … // There’s big underwear / and little underwear.” Underwear can also be dirty or clean, old or new, serious or funny, for boys or for girls, and for every day of the week. But though the colors and patterns may vary, apparently underwear cannot be boxers, and sadly, there’s no underwear for babies, who wear diapers. Different colors highlight opposites in the all-caps text, though not all these words indicate opposites, per se—the days of the week are in rainbow hues. Chapman’s digital artwork features brightly colored veggie characters with stick arms and legs against white backgrounds. Simple props provide context (like the flies around the hamper), while a red, dashed line indicates movement. Front endpapers introduce the clothes-wearing veggies, while closing endpapers show them in their underwear (or not, as is the case for Pea).

Those who are making the transition from diapers are sure to laugh, though it doesn’t really stand out from the other books in the underwear drawer.