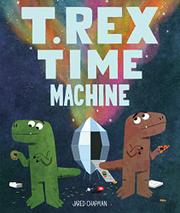 There’s a theory that human nature never changes. People have the same wants and needs, no matter what time period they live in. This rule is even more true for dinosaurs.

Dinosaurs are always hungry, at least on the evidence of this graphic novel–esque picture book for young readers. When two dinosaurs encounter a time traveler, in a historic moment, their first thought is to eat him. And when the time machine flings them into the future to a bustling city full of strip malls, they just keep on eating. Nearly the entire plot of the book is a catalog of food they enjoy. Dinosaurs love doughnuts and microwaved noodles. Their meals are interrupted from time to time by the local police, who are not pleased to see tyrannosaurs in the convenience store. (The police force, and the other residents of the city, are refreshingly multicultural.) The main characters are so single-minded that the story becomes repetitive, and a little aimless, but there are some pretty good jokes along the way (“Hey! T. Rexes! Put your tiny, baby hands in the air!”), and the language is surprisingly poetic. (One dinosaur describes a microwave as “the sun in a box.”) The art is also appealingly primitive (no pun intended). Each tyrannosaur is basically a collection of rectangles perched on one another.

Very young readers may get a bit restless, but the book should leave them amused—and maybe a little hungry.