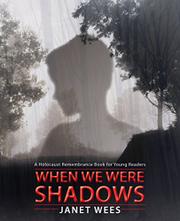 WHEN WE WERE SHADOWS

From the Holocaust Remembrance series

A Jewish boy in the Netherlands spends World War II in hiding in this retelling of real-life events.

Walter, a 5-year-old German boy, doesn’t understand why his family flees to the Netherlands. It’s not an unpleasant life for the first few years. Even after he’s barred from attending school, he joyfully helps the local farmers with their work. The Underground is very helpful, spiriting first his grandmother and then his sick sister away to safer hiding spots. Constantly aided by the Underground and their helpful neighbors, Walter’s family moves time and time again. For over a year they live in a hidden village in the woods, in barracks built into the hillside, eating almost nothing. Through a mix of retrospective first-person narration (ostensibly in the form of stories told to a granddaughter) and wartime letters, readers see the eight years Walter spends whispering in secret bolt holes. Walter never understands Nazi anti-Semitism, and it’s neither explained nor shown in any detail; he scarcely encounters a single Nazi during the war, and anti-Jewish laws are mostly absent here. A one-paragraph author’s note lightly contextualizes the history (without identifying the tale as a biography of Ze’ev Bar, formerly Walter Bartfeld), though it does not provide any further information about the Nazi persecution of the Jews.