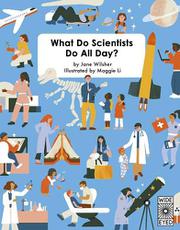 WHAT DO SCIENTISTS DO ALL DAY?

In the spirit of Richard Scarry, Wilsher and Li offer glimpses of people engaged in 102 science or science-related activities.

Take the “all day” bit as poetic license. Along the same lines as Wendy Hunt’s What Do Animals Do All Day? (illustrated by Studio Muti, 2018) but closer to reality, eight tiny figures—rendered in Li’s neatly drawn illustrations with skin of diverse hues but Eurocentric work dress—in each of 14 generic locales describe their interests or occupations in a sentence or two. Viewers are challenged to identify them from these descriptions using visual clues in a populous unlabeled scene such as a hospital, an aerospace center, or a nature preserve. The author loosens the definition of “scientist” enough to include two schoolchildren taking scientific notes, a tree surgeon, a co-pilot, and a jackhammer operator (“Expert on Drilling”). The author also occasionally fudges (a marine biologist at an Arctic research station poses next to a “Research Scientist” who “is studying to become a marine biologist”) or creates artificial distinctions, such as “Mechanical Engineer” and “Maintenance Engineer.” Nevertheless, the identification game may give the abilities of budding sleuths a workout in addition to the notion that science encompasses a broad range of occupations.

The premise is mostly a pretext, but it should appeal to younger STEM-winders.