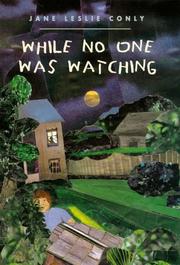 WHILE NO ONE WAS WATCHING

A stolen rabbit connects three neglected children and a pair of young sleuths in this busy, overpopulated story from Conly (Crazy Lady, 1993, etc.). Bad-news cousin Wayne leads Earl Foster, 11, and his learning-disabled brother, Frankie, into an affluent neighborhood on another bike-stealing expedition; Frankie carries away a pet rabbit, instead sneaking it into the house where he and his siblings live with Aunt Lula until their father, laid-off, can get back on his feet. Addie, the rabbit’s devastated owner, gets little help from police, but finds an unexpected ally in her neighbor, Maynard, a lonely adopted classmate born in India. While the two are gathering clues, Aunt Lula vanishes, leaving Earl to care for his two siblings as best he can. Conly develops her story at a deliberate pace, splitting the point-of-view among no fewer than five characters. Angela, a bedwetter with a broken yardstick for a magic wand and an unfettered imagination, makes the rest of the cast seem generic; a pivotal scene is farfetched at best, and a wonderfully tidy resolution that finds Addie with her rabbit, the Fosters with their father, and Wayne in jail is equally contrived. The book is readable, but the capable Conly uses artifice to bring the plotlines together, and the Fosters are not as memorable as the abandoned children in Cynthia Voigt’s Homecoming (1981) or Jackie Koller’s A Place to Call Home (1995) (Fiction. 11-13)