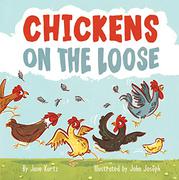 CHICKENS ON THE LOOSE

Urban backyard chickens go on a madcap tour of the city in this rhyming romp.

When a flock of hens and one little chick escape from their backyard coop, they make the most of their chaotic dash around a vibrant city. Pursued by an ever growing crowd of frantic humans, the chickens sneak into shops, abscond with food-cart delights, and add some painted poultry touches to a wall mural. As in many picture books about mischievous chickens, the joy lies in the thrilling pandemonium the birds create from Page 1. This promising start leads to a satisfying “SPLAAAT!!!” at the climax of the chase. Unfortunately, the following pages fail to resolve the story clearly, as the humans inexplicably disappear and the chickens magically end up back in their coop. The rhyming text has stop-and-go pacing that mimics the chickens’ running and the humans’ attempts to stop them. A word here or there seems a bit forced into the rhyme scheme, but overall the narrative bounces off the tongue. The marker-bright illustrations are frenetic and filled with humorous details. Human characters have a wide range of skin tones, hair colors and textures, and attire. Backmatter includes information about urban chicken keeping and a few chicken facts. This information is interesting but also a bit incongruous as the chickens in the book are so anthropomorphized.

Fun but lightweight, this title adds little to the canon of chicken kid-lit.