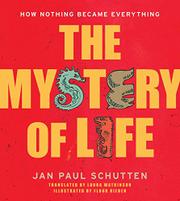 THE MYSTERY OF LIFE

How Nothing Became Everything

A lighthearted view of the universe’s progress, from the Big Bang to the evolution of bacteria, bonobos—and “Joe Schmo from Buffalo.”

Returning continually to Mr. Schmo (“Jos Grootjes uit Driel” in the original Dutch) as his exemplar for Homo sapiens, Schutten starts simple—“Yes, even Lady Gaga is made up of atoms”—and proceeds from there. He explains how nonliving components combined to create living things of increasing complexity through evolution: “the greatest scientific idea of all time.” Defining “life” (arguably) as anything that eats, reproduces, and dies, he offers thoughts on selected biological structures and processes from genetics (“Your genes are actually the boss of you”) to how eyes developed and why it’s such a good idea to have some separation between mouth and butt. Declaring himself an agnostic, he also takes swipes at both intelligent design arguments and creationism. Though his discussion of hiccups is blurred by fuzzy logic, and viruses and extinction events rate barely a mention, his overall account of life’s origins and tenure is as rich in detail as it is entertaining. Rieder likewise supplies a flood of line drawings that provide humorous visual commentary as well as additional information.

A glib and occasionally spotty picture but eminently readable and generally on target.