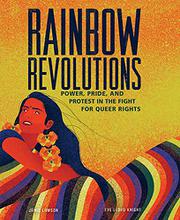 Power, Pride, and Protest in the Fight for Queer Rights

A brisk stroll down the road of LGBTQ+ history, primarily in the United States and Europe.

Lawson and Knight guide readers through a starry-eyed examination of queer history. The work is divided into 23 four-page chapters. Each begins with a full-page spread of bold artwork and an introductory sentence or two, which are followed by two pages of text discussing the chapter’s theme. Although the book introduces international movements and icons—Frida Kahlo, Margaret Mead’s Coming of Age in Samoa, prime minister of Iceland Jóhanna Siguðardóttir—the history targets the United States, the United Kingdom, and Germany. The text also stops with President Barack Obama’s term, excluding his successor’s strong anti-transgender and anti-queer policies. Within the text, the facts are presented somewhat breezily; Mead’s book is mentioned as being published “in the late 1920s” instead of noting 1928 as the publication year. The vibrant illustrations are presented without captions or even context, doing little to enhance or support the text. Readers already familiar with queer history may recognize Marlene Dietrich, Venus Xtravaganza, or Grace Jones, but readers new to the topic may be left frustrated. The backmatter includes a timeline, glossary, and spotty index; Venus Xtravaganza, although pictured and mentioned, is not listed, for instance, while Hector Xtravaganza (also mentioned) is.