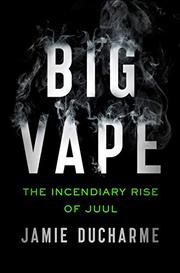 The Incendiary Rise of Juul

A deep investigative dive into the electronic cigarette behemoth.

In this riveting exposé, Time health and science journalist Ducharme chronicles the history and problematic future of Juul, which quickly rose to prominence after a series of missteps. She profiles friends and former smokers James Monsees and Adam Bowen, who, during a 2005 Stanford product-design program, sought to develop an alternative to traditional tobacco-burning cigarettes. Focusing on harm reduction, they positioned their prototype as a way to “improve the lives of adult smokers” by helping them transition to the supposed safety of vaporizing pens, which heat a liquid but avoid combustion. Piggybacking on lessons from earlier, less-successful vaping devices, Monsees and Bowen, aided by Japanese investors, laid the groundwork for a successful venture—but not without a host of problems that did not go unnoticed by the Food and Drug Administration and would reemerge later to cloud their success. With briskly paced writing, Ducharme details the “buzz-testing” conducted by Juul employees to gauge the addictive potency of the nicotine formulations in the vape pods and how the “cool kids”–friendly product marketing campaign became “the company’s religion.” As the author writes, "more news stories suggested that Juul had torn a page from the Big Tobacco playbook and purposely hooked teenage customers for profit." By 2015, Juul vaporizers were widespread, and the company started to record significant profits. However, when reports of underage users emerged, Juul dispatched representatives to schools to warn about the dangers of nicotine, “sprinkling in references to how safe Juul was and how it was going to get FDA approval any day now.” Juul then partnered with big tobacco corporation Altria, and the emergence of a mysterious pulmonary illness ignited anti-vaping activists and public health watchdogs. In the wake of hundreds of lawsuits set to hit courtrooms in 2022, both Monsees and Bowen have “abandoned ship.” Based on dozens of interviews with former employees, investors, doctors, and researchers, this well-rounded journalistic narrative is consistently informative and alarming.

Intensive, exemplary reportage on a controversial industry cloaked in scandal.