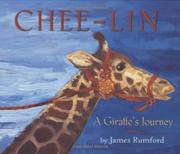 Rumford presents the remarkable story of an African giraffe that was captured and sent to China in 1414. Based on a short mention in a medieval text, the narrative creates a fully anthropomorphized recounting of giraffe Tweega’s travails. First captured by African hunters, baby Tweega is sold to an Indian sultan, who then gifts Tweega to a Chinese emperor. The Chinese believed that a mythical animal called a chee-lin had appeared at the birth of Confucius and symbolized good fortune; hoping that Tweega is another chee-lin, the emperor keeps him until the sad animal ultimately dies of old age. Tweega understands his life through the behaviors of his caretakers, who range from caring to indifferent to cruel. The extreme anthropomorphism will either add to or detract from the experience, depending on one’s preferences. With characteristically lovely design, Rumford often places text boxes against backgrounds inspired by African, Persian or Chinese patterns, which combine with lovely paintings to evoke a flavor of the cultures and the time. An annotated map at the end graphically dramatizes Tweega’s journey. (author’s note) (Picture book. 7-10)