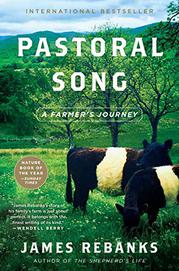 A beautifully written elegy to traditional farmers and farming methods.

In his second book, named by the Sunday Times as the best nature book of 2020 in the U.K., Rebanks begins by recounting his youth on his grandparents’ farm in the Lake District of England, tagging along with his grandfather as he did his work, teaching him the “old ways.” He compassionately describes riding along in the tractor as “black-headed gulls follow in our wake as if we are a little fishing boat out at sea.” He also shares fond memories of picking blackberries and making jam with his grandmother. “My grandmother was an expert at turning the things the farm grew, harvested and reared into meals,” writes the author. “Almost everything she cooked was home-grown, seasonal and local.” Over the years, however, Rebanks witnessed the lamentable transformation of the land as corporations began buying local farms and introducing “modern” technologies. By the time he inherited the family farm, most of the local farmers and workers were gone, there were no worms in the fields, and the stone barns, walls, and hedges had been ploughed in the name of progress. The tools and practices introduced decades earlier had taken their toll, and much of the damage was irreversible. Even as people became more obsessed with food, they remained disconnected from the land. People worried about what they should eat and wanted options, but they had little knowledge regarding how to sustainably produce food. “I had inherited a complex bundle of economic and ecological challenges—and that, perhaps, was what it really meant to be a farmer,” writes Rebanks in this eloquent tribute to a vanishing way of life. Guided by the knowledge passed down by his family and recent advances in sustainable technology, the author continues his journey, slowly salvaging his tiny corner of the world to create a legacy for his children and the future.

A lovely cautionary tale filled with pride, hope, and respect for the land and its history.