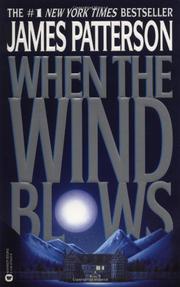 WHEN THE WIND BLOWS

This time out, Patterson (Jack and Jill, 1996, etc.) summons some brio and does a magic hat trick with the million-dollar—promo thriller genre. The most brilliantly drawn character here is a genetically engineered 11-year-old girl, Max (for Maximum), who is half-bird and can fly; that Patterson pulls off a satisfying account of the bioengineering that created the girl is a credit to his background research in genetics. As for the story itself, FBI agent Tom Brennan (a.k.a. Kit Harrison) is a loose cannon at the Dearer office. He was hired for that very quality, his ability to work outside the Bureau's paralyzed imagination, but his obsession with the murders of two geneticists, plus the death of his wife and two sons in a plane crash, has caused the Bureau to send him off to Nantucket for a rest. Instead, Brennan goes on a private crusade into a Colorado area, where he suspects some illegal biological engineering is taking place. He rents a cabin behind the animal hospital of veterinarian Frannie O'Neill, whose husband David, a doctor, was murdered a year ago. Then her friend Frank, also a doctor, is murdered as well. Thus far, all is standard-thriller fare—until Frannie rescues the wounded bird-girl Max, whom she finds in the woods and captures with Tom. (Max has escaped from the big, dark genetics lab where she was raised.) Patterson limns Max marvelously, giving her real weight on the page, and when Max, Tom, and Frannie rescue four younger bird-children from the lab—Peter, Wendy, Icarus, and Oz—the story rises well above standard, with Patterson showing an especially skilled hand with children's dialogue. Big warm feelings, usually foreign to thrillers, coax laughter during times of high tension. Reads like a dream.