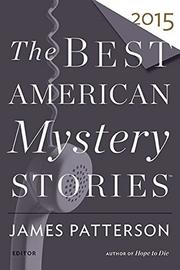 These short stories lean more toward horror than whodunits, casting long shadows despite their brevity.

Editor Patterson singles out stories that have cinematic scope. Jeffery Deaver's "The Adventure of the Laughing Fisherman" gives a tip of the deerstalker to Sherlock Holmes through a protagonist who uses his deductive genius for more sinister ends. In "Molly's Plan," John M. Floyd maps out a nearly impossible bank robbery with a twist ending so ingenious it's tempting to root for the bad guys. The specter of war figures into several tales: a sniper questions his ability to continue in the field; a vet now working in elder care carries out a vendetta; and a woman deranged by war is herself as volatile as an IED. Children are in peril in numerous stories, from abductors, teachers, truly vicious nuns, and sometimes each other. Michael Connelly and Dennis Lehane team up in "Red Eye," sending Harry Bosch to Boston, where he and Patrick Kenzie try to find a missing girl whose abductor keeps to a tight schedule. "The Home at Craigmillnar" is Joyce Carol Oates' chilling take on the abuse scandals in Catholic children's homes, serving up rough justice to Mother Superior decades after her reign of terror. Stories set in Haiti and off the Australian coast brighten up the noir, albeit largely in shades of red. Of particular interest for would-be mystery writers: notes at the end of the book feature brief descriptions of each story's inspiration and development, an illuminating peek into the creative process. Richard Lange's "Apocrypha," a bank heist tale primarily set in a tenement hotel, was rescued from a novel the author couldn't develop, and it's a gritty jewel.

These edgy tales strike hard and fast but leave vivid memories behind.