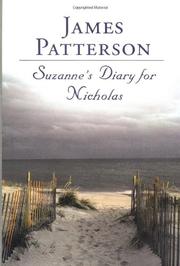 For sheer genre-crossing audacity, you might think nothing could outdo John Grisham’s season on a Mississippi farm (A Painted House, p. 128) until you read this relentlessly throat-clutching love story from thrillermeister Patterson.

The night Matt Harrison’s editor Katie Wilkinson presents him with a contract for his new book of poems, she has even bigger news for him: She’s pregnant. But she never gets to show him the silver rattle she’s tucked into a drawer, because before she can share her news, he’s gently but firmly walked out on her, leaving her high and dry with only a book for company. It’s a diary Matt’s wife Suzanne kept for their baby son Nicholas, and if Katie reads it, Matt urges, she’ll understand better why he had to leave. The diary does explain a great number of things—how lowly Matt managed to enthrall a successful Boston physician like Suzanne, why Suzanne thought it would be a good idea to keep a diary for her infant child, why “we is always so much better than I,” why “one today is worth two tomorrows,” and how a propulsive storyteller like Patterson (Roses Are Red, 2000, etc.) can keep the pot boiling even without the help of Alex Cross and a high body count—but not why Matt left Katie. What’s really important, though, is that Katie is on hand for a series of interludes to telegraph exactly when to laugh and when to cry for audiences that missed The Prince of Tides and The Bridges of Madison County.

A moving, and fast-moving, fable compounded about equally of tenderness, apothegms, doggerel, endearments, and mush. The ending, which makes nonsense of Matt’s departure, suggests how severely Matt may have understated the case in warning that “there will be parts that may be hard for you to read.”