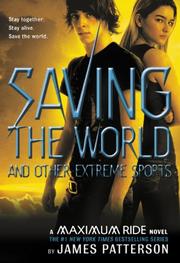 SAVING THE WORLD AND OTHER EXTREME SPORTS

Patterson wraps up his sci-fi thriller series with consistent excitement but too few explanations. Max and her flock, human with avian genes, flee the mad scientists and seek answers. Fang starts a blog, hoping that kids around the world can help. The flock is captured again and escapes again, aided by Ari, the seven-year-old human morphed halfway into a wolf; but fears about Ari’s loyalties split up the flock for the first time. The final battle takes place in Germany, where Max learns who runs the international corporation planning to reduce the earth’s population through a massive genocide. The short, action-packed chapters end breathlessly, with twists at every turn; however, too many unanswered questions have been raised throughout the trilogy. Patterson clears up some mysteries—including Max’s unknown parentage—but much of the drama seems manufactured expressly for page-turner effect, while the promised emotional and technological complexities fall by the wayside. Adrenaline galore, but seriously compromised by the unsatisfying wrap-up. (Science fiction. YA)