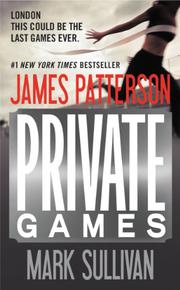 Zingy formula—emphasis on formula—fiction from the literary maquiladora that is James Patterson.

All right, it’s not literature. But Patterson, he of six dozen novels and counting, has an uncanny knack for the timely thriller, and this one is no exception. The Private of the title is a security firm (think Blackwater, though better at hiding its secrets) charged with providing said security during the London Olympic Games. As the book opens in July 2012, a Very Bad Man is about to disrupt the games in ways that the Palestinians at Munich could never imagine, with the secondary aim, it would seem, of watching the cream of British pop music run for the exits: “To keep the infernal singing from getting to me, I focus on the fact that just a few minutes from now, I will reveal myself. And when I do I’ll be able to rejoice in their shared horror—McCartney, John, and Faithfull, too.” Now, Sir Paul and Sir Elton, sure, but what’s Marianne Faithfull ever done, apart from smoke too many cigarettes, to offend this puritan? It’s tipoff enough that he goes by the name of Cronus, the Greek Ur-god that killed and ate his own children. So, Hannibal Lecter, no? Not quite—and nowhere near Thomas Harris’ league, insofar as the writing is concerned. Private eye Peter Knight, whose name is as suggestive as Philip Marlowe’s, goes into action, working with the ever-irritating reporter Karen Pope to take down the voracious Mr. Bad, who shares narrator duties with the authors, and who seems to take a rather wide view of which children he’s entitled to eat. Will the world ever be safe from our literal spoilsport? Read this and see. Be offended if you’re a fan of Renée Zellweger or dislike offhand sexism. Be more offended if you’re a fan of English writ well.

A pleasant romp all the same; as lightweight as a whiffleball—but fun.