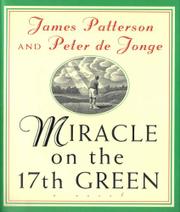 MIRACLE ON THE 17TH GREEN

Preceded by the release of the Kevin Costner film Tin Cup, and by the literary flourishes of John Updike's Golf Dreams, thriller-writer Patterson (Jack and Jill, p. 998, etc.) and journalist de Jonge's Christmas fantasy about a poor-in-spirit advertising copywriter becoming a finalist at the PGA Senior Open looks like a sales shoo-in. Travis McKinley, 50, after 23 years of writing jingles for McDonald's, is fired in an office-wide layoff. Alone on the 17th hole of his Winnetka golf club on Christmas morning, he discovers that he has suddenly acquired a gift for making Zen-like putts. But even as he decides to turn professional and try for the Open, his gynecologist wife calls it quits, though his three children take an interest in his quest. It's not all miracles for the next year on tour, but when they're needed, the gods smile. Quite entertaining but too vulgar for kids.