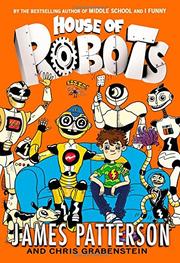 From the House of Robots series, volume 1

Sammy is less than thrilled when his genius inventor mother creates a robot brother for him.

Sammy Hayes-Rodriguez's life has always been filled with robots. His mother has invented automatons that clean the floors, mow the lawn, give traffic reports and even plant fantastic gardens. Sammy's school has until now been a robot-free zone, but when Mom invents E (for Egghead, or maybe Einstein Jr.—his parents can’t decide) and insists Sammy take the new robot to school, things get out of hand. Chronicling the ups and downs of an entire school year with a robot brother, the authors put cute sci-fi twists on first-time crushes, school bullies and best-friend troubles. There's nothing here that breaks new ground or illuminates the psyche of young boys in any new or interesting ways, but there are plenty of amusing jokes. Young readers with an interest in science will certainly be engaged. A subplot featuring Sammy's younger sister, a brilliant girl who is homebound by severe combined immunodeficiency disorder, is as by-the-numbers as the rest of the book, but it doesn't tie in to the robot plot until the very end. It's hard to tell if this development is a clumsy climax or an awkward setup for a sequel. Either way, it doesn't work well with everything that came beforehand.