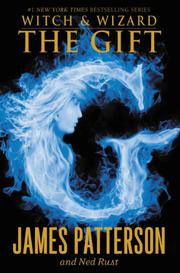 From the Witch & Wizard series

Whit and Wisty Allgood, sibling magic-users with amazingly unreliable powers, return to fight with their utterly expendable teen comrades against The One Who Is The One, dread master of the New Order, who hates the young and those with imagination (Witch & Wizard, 2009). Whit and Wisty carry out a mission and are betrayed. They are captured and escape. They run and are captured again. They try to save their parents (for naught), but spooky unknown forces save the teens who (obviously) live to fight again in the upcoming sequel. Fiction brand Patterson returns with a new co-author, Rust, to pick up the story of the Allgoods, and what they offer is more nonsensical, inconsistent blather. There are no characters that even rise to the level of stereotypes and no genuine emotions in this embarrassing attempt at a “fantasy” series that insults both genre and audience at every turn. At best, it reads like a Carol Burnett Sci-Fi sketch with all of the mugging and none of the laughs. A new low in children’s publishing. (Fantasy. 9-12)