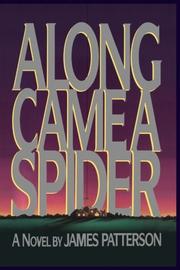 ALONG CAME A SPIDER

Catchy title; too bad the psychothriller behind it—despite the publisher's big push—is a mostly routine tale of cop vs. serial-killer. And it's really too bad for Patterson (The Midnight Club, 1988, etc.) that William Diehl's new thriller, Primal Fear (reviewed above), covers some of the same territory with superior energy and skill. A few charms lift this above run-of-the-mill: Patterson's hero, D.C. psychologist/cop Alex Cross, is black, while his lover, Secret Service honcho Jezzie Flanagan, is white; and the narrative moves briskly by cutting between Cross's ambling account and a sharper third-person tracking, mostly of the killer's movements. He is Gary Soneji—a nobody living a deceptively quiet life as Gary "Murphy"—who has killed 200 people and now wants to commit the Crime of the Century and become Somebody: Soneji/Murphy snatches the daughter of a top actress and the son of the US secretary of the treasury. Enter Cross and Flanagan, whose bad luck at finding kids and kidnapper—who, taunting the cops, kills an FBI agent and gets away with a $10-million payoff, while one of the kids turns up dead—changes only when Soneji/Murphy, cracking up, holds hostage to a McDonald's and is wounded by a cop. Here, Patterson's tale begins to mirror Diehl's: Soneji/Murphy turns out to suffer from the same sensational psychosis as Diehl's villain; and in the ensuing trial, Soneji/Murphy's lawyer pursues a defense similar to that of Diehl's attorney-hero. But where Diehl's villain roars on the page, Soneji/Murphy barely smirks; and while Diehl's courtroom crackles with intelligence, Patterson's is almost transcript-dull. Patterson does wind up, however, with a fine noir twist. Cross is a likable hero, but with a watery plot and weak villain—Hannibal Lecter would eat Soneji for breakfast—he doesn't have much to work with here.