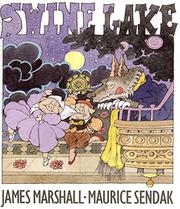 With a connection between plot and pictures that’s often fitful, this patchy star vehicle is more likely to confuse than amuse. Wandering into an unfamiliar neighborhood, a wolf smells pig and, intoxicated, gains entry to a theater in which the Boarshoi Ballet is performing Swine Lake. His lust for pork abruptly vanishes and a new balletomane is born; he is so enthralled by the performance that he returns the next night, where he, to subsequent critical acclaim, impulsively leaps on stage. Although the text expertly evokes the grand illogic of most ballet plots, the prose is wordy and the pacing uneven. Sendak’s illustrations tell a somewhat different tale than Marshall’s, portraying a shabby wolf deliberately seeking out the company; the artist also seems more intent on packing each scene with stage business, dance references, in-jokes, and tributes than filling in gaps, such as the mysterious disappearance of the first night’s “monster” (a lion). The author’s and illustrator’s names guarantee good sales, but children are unlikely to care for this, and as a memento mori, it falters next to Marshall’s The Owl and the Pussycat. (Picture Book. 8-11)