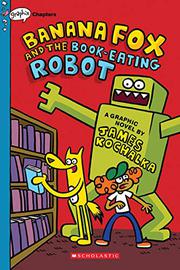 BANANA FOX AND THE BOOK-EATING ROBOT

From the Banana Fox series, volume 2

In his second adventure, the goofy gumshoe contends with a robot that eats library books.

Although as blazingly yellow as a crayoned sun, color is Banana Fox’s only brightness. Often daffy to the point of nonsense, he lives in a cardboard mansion, enjoying his newfound fame after putting villain Sour Grapes and his Secret Sour Society in jail in his debut. When his ephemeral estate disintegrates in a rainstorm, Banana Fox realizes his friend William wasn’t there to help him. Whatever can have happened? (Nothing, it turns out.) Banana Fox, William, and Sharyanna then learn that Sour Grapes Jr. has been freed and is determined to turn the tables on Banana Fox, imprisoning him for racking up a whopping $3,645 in overdue fees. Before long, William, Sharyanna, and Banana Fox find themselves facing off against a lime-green robot intent on wolfing down the written word. When this plan backfires and Sour Grapes Jr.’s favorite book, Floopy Boopy Bunny Has a Birthday, is next on the chomping block, can Banana Fox stop this ravenous robot? This sophomore middle-grade graphic novel follows in its predecessor’s footsteps with its over-the-top zaniness, exquisitely eye-popping colors, and quickly plotted chapters. This world should have broad appeal among both the Dav Pilkey crowd and readers who relish a zippy, funny diversion. William presents White, and Sharyanna has brown skin.