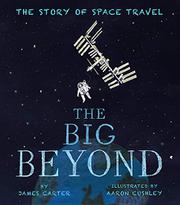 The Story of Space Travel

A capsule history of space exploration, from early stargazing to probes roaming the surface of Mars.

In loosely rhymed couplets Carter’s high-speed account zooms past the inventions of constellations, telescopes, and flying machines to the launches of Sputnik I, the “Saturn Five” (spelled out, probably, to facilitate the rhyme) that put men on the moon, and later probes. He caps it all with an enticing suggestion: “We’ll need an astronaut (or two)— / so what do you think? Could it be YOU?” Cushley lines up a notably diverse array of prospective young space travelers for this finish, but anachronistic earlier views of a dark-skinned astronaut floating in orbit opposite poetic references to the dogs, cats, and other animals sent into space in the 1950s and a model of the space shuttle on a shelf next to a line of viewers watching the televised moon landing in 1969 show no great regard for verisimilitude. Also, his full-page opening picture of the Challenger, its ports painted to look like a smiley face, just moments before it blew up is a decidedly odd choice to illustrate the poem’s opening countdown. As with his cosmological lyric Once upon a Star (2018, illustrated by Mar Hernández), the poet closes with a page of further facts arranged as an acrostic.