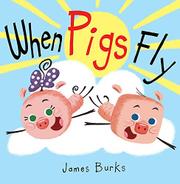 What does it take to get a pig aloft?

Sibling pigs Henry and Henrietta of Pigs and a Blanket (2016) are back, with Henry in control of the blanket they learned to share in their previous outing (it makes a great superhero cape). He’s determined to be the first pig to fly. When his taped-on cardboard wings result in a crash, Henrietta suggests they fly a kite…which Henry rides for crash No. 2. Oscillating-fan jet pack? There’s a third crash, and Henrietta wonders if she will need a helmet if she continues to help. Balloons? Feathers? Trampoline? No flight in sight. Henry gives up. But his sister, who had been trying to make a King Kong movie before helping Henry try to fly, has an imaginative idea to bring his dream to life. Turns out pigs can fly pretty high if they have the right special effects. Burks’ enthusiastic tale of porcine perseverance is told entirely in dialogue between its pink, porky principals. Bright colors and wide-eyed cartoon characters in the illustrations have a pleasantly textured, chalky look and extend and complement the text, easily communicating Henry’s excitement.

Young dreamers and aviators (and piglets) will respond with delight.