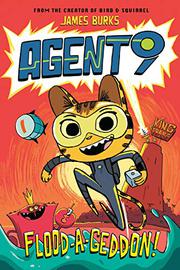 From the Agent 9 series, volume 1

An impulsive feline agent and her robot fish sidekick must save the world from a diabolical crab.

With an act-first, think-later attitude, tiger-striped cat Agent 9 is on probation with the Super Secret Spy Service after racking up millions of dollars in damage to property. After pleading her case to headquarters, she is granted one last chance to prove herself. She is accompanied by her trusty mechanical-fish companion, Fin, who, although it communicates only in beeps, acts as her voice of reason. When both Agent 9’s boss, O, and Fin are captured by the villainous King Crab, Agent 9 soon uncovers Crab’s true intentions: He means not only to infiltrate S4, but also to melt the ice caps, flood the entire globe (creating the titular “Flood-a-Geddon”), and build a worldwide water park. Agent 9 must stop him before it is too late, but can she temper her impulsive streak long enough to save the day? Burks’ delightful graphic romp features an animal cast of characters with familiar human traits; Agent 9’s go-go-go attitude should resonate in a world that rarely prizes slowing down. Full-color panels, amply punctuated with action words, of varying sizes fill the spreads, making for a fast-paced offering. With a blend of thrilling chase scenes and a generous helping of humor, this crowd pleaser should be catnip to fans of series like Aaron Blabey’s The Bad Guys.

Spy aficionados will find this purr-fect.