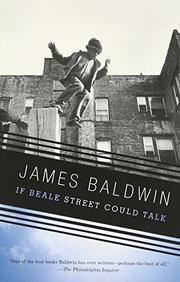 IF BEALE STREET COULD TALK

This new Baldwin novel is told by a 19-year-old black girl named Tish in a New York City ghetto about how she fell in love with a young black man, Fonny. He got framed on a rape charge and she got pregnant before they could marry and move into their loft; but Tish and her family Finance a trip to Puerto Rico to track down the rape victim and rescue Fonny, a sculptor with slanted eyes and treasured independence. The book is anomalous for the 1970's with its Raisin in the Sun wholesomeness. It is sometimes saccharine, but it possesses a genuinely sweet and free spirit too. Along with the reflex sprinkles of hate-whitey, there are powerful showdowns between the two black families, and a Frieze of people who — unlike Fonny's father — gave up and "congregated on the garbage heaps of their lives." The style wobbles as Tish mixes street talk with lyricism and polemic and a bogus kind of Young Adult hesitancy. Baldwin slips past the conflict between fighting the garbage heap and settling into a long-gone private chianti-chisel-and-garret idyll, as do Fonny and Tish and the baby. But Baldwin makes the affirmation of the humanity of black people which is all too missing in various kinds of Superfly and sub-fly novels.