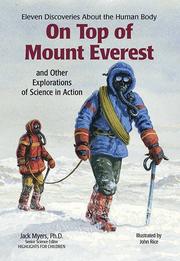 ON TOP OF MOUNT EVEREST

In lightly revised articles that first appeared in Highlights, Myers looks at 11 topics in human biology, from hard-to-explain puzzlers like laughter and tongue rolling, to the deleterious effects of loud noises, ultraviolet rays and smoking. Boiling down (cited) research reports, he writes in fluent, informal prose, slipping in references to questions or comments received from children along with the occasional statistic or scientific term. Though he sounds several cautionary notes—particularly about the dangers of cigarettes, which Boyles backs up with a chapter on smoking as an addiction among young people—the overall tone is light, bucked up by Rice’s colorful diagrams and cartoon vignettes, plus a lively photo or two. Consistently attentive to the interests of his intended audience, Myers is one of the most engaging science writers around; here he’s in top form, and rare is the reader who will be able to resist his invitation to see what makes us, and the world, tick. (bibliography) (Nonfiction. 8-10)