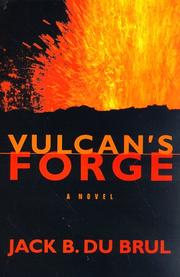 A debut thriller introducing Philip Mercermine engineer, geological consultant, and the only Bond clone who carries a Derringer strapped to his testicles. A study in triple crosses, Du Brul's story tells of a 40-year plot contrived by the Russians, who want to own a newly risen underwater volcano 200 miles off Hawaii. Geological physicist Pytor Borodin and an American physicist who's studying the oceanic Bikini A-bomb test have independently discovered the same fact: that enormous underwater thermal heat, when mixed with lava, can produce the hardest fuel known to manbikinium, which, once put to use, gives off more energy than is needed to burn it. Back in 1954, Borodin had also discovered that the thinnest part of the tectonic plate in the Pacific is just 200 miles past Hawaii. So the Reds secretly sink a ship carrying an A-bomb. The plan is to detonate it on the seafloor, creating a volcano whose lava can then be processed very cheaply for bikinium, leaving the Soviets as the most powerful people on earth. But during the 40- year wait for this secret volcano to break to the surface, at which point it can be claimed as Soviet territory, the USSR empire collapses and a KGB officer decides to sell the whole plan for Vulcan's Forge to North Korea for $100 million. Enter Philip Mercer, out to save the life of on old friend's daughter, a member of a geologic survey team lost near the volcano. Much bang-bang but little kiss-kiss ensues. Meanwhile, a superbillionaire Japanese racist plots the secession of Hawaii, and Mercer, empowered by the US President, finds himself in cliffhangers more wonderfully outrageous than you'll find in Clive Cussler or Ian Fleming. A finely tuned first installment in the Mercer series, buoyed by strong, fresh writing. Remember, Fleming could never top From Russia With Love, so come aboard now.