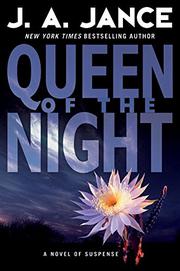 QUEEN OF THE NIGHT

Jance offers that rare—and welcome—hybrid: the suspense novel with heart.

Jonathan Southard is one of those unhappy men whose unrequited love affair with life has caused a volatile, long-term, internal simmering. One day the mixture explodes, resulting in a crime that is both horrific and, in a sense at least, foreseeable. He shoots his wife, her dog and their two young children, construing this last as an act of mercy inasmuch as it will spare them an aftermath of humiliation and shame. Having wiped out his San Diego family, he sets off for Tucson and the home of his mother, planning to clean the slate. He’s always hated Abby Tennant, attributing to her voluminous maternal shortcomings, of which she is largely innocent. With less difficulty than Southard expected, the bodies are discovered, clues are put together, identities established and soon enough the manhunt is on, participated in by multiple police forces from several states. Among these are the elite Shadow Wolves, Indians who patrol reservation land near the Mexican border. Enter Dan Pardeey. Half Anglo, half Apache, he has a special connection to the small survivor of another of Southard’s monstrous crimes. Angelina Enos, age four, has remained alive only by virtue of being tiny enough to escape notice. Eerily, this parallels Pardee’s own long-ago experience, and when she reaches out to him he has no choice but to respond. Because he does, his life is irrevocably changed and, in a kind of chain reaction, so are the lives of a variety of other players, one way or another, for good or ill, in Jance’s absorbing cast.

A storytelling machine, Jance in her 41st (Trial by Fire, 2009, etc.) is at the top of her game and just about irresistible.