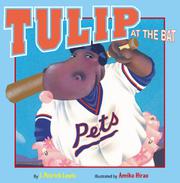 TULIP AT THE BAT

The New York Pets square off against the Boston Beasts, with the usual result, in this very distant cousin to “Casey at the Bat.” It’s the bottom of the ninth, two outs, Boston up by one—but with Pets pitcher Armand Armand Octopus hugging second and corpulent outfielder Amanda Elephant really holding down first, up to the plate comes Tulip Hippo, with her “double stubble chins” and a pink tutu “held together by a dozen safety pins.” Unlike Casey, though, Tulip drills the pitch—so hard that it sinks into the ground in front of the plate, giving all three runners time to lumber home. As the line breaks in the last verse don’t come on the rhyming words, and Lewis has Tulip bunting while in the picture she’s swinging away, this strikes out on editorial attention to detail. However, Tulip, who is last seen waving triumphantly with her teammates through a blizzard of ticker tape, makes a fetching hero, and the outsized “WE ARE THE CHAMPIONS” message at the end will be music to the ears of New York fans everywhere. (Picture book. 6-8)