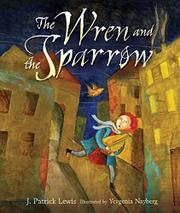 THE WREN AND THE SPARROW

An old man called the Wren because of the beautiful music he makes must give up his beloved instrument during the Nazi occupation of his Polish town.

This Holocaust fable keeps its true subject understated. Hitler is simply called the Tyrant, and all the audience knows is that it was a dark time. Lewis’ poetic phrases collide with harsh realities. “Food and clothing were strictly rationed. Stores that once provided necessities were boarded up.…The town shriveled up like a rose without rain.” For the Wren, the most devastating day is the one when the Tyrant’s guards collect the town’s musical instruments. Before giving his pear-shaped hurdy-gurdy away, he pleads for one more song. The crowd rises up and sings as one. The Wren is taken away, never to be seen again. Luckily, the Wren’s student, a girl with fiery red hair called the Sparrow, saves the instrument, and it is passed on to future generations with a secret note tucked inside, so the music will continue and no one will ever forget. Nayberg’s stylized brush strokes initially take tones of brown and drear, but they warm with hope toward the end. The textured creases and cracks of paint echo the deliberate folds of the letter that holds such importance.

A lyrical look at a horrific time; an appeal to the necessity of remembering.