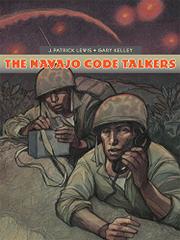 Persecuted by the U.S. government, many Navajo children were forced to give up their language in boarding schools established in the 19th century and designed to eradicate Native American culture.

Ironically this language would be used during World War II as a secret code by American military forces in the Pacific. Although other Native Americans became Code Talkers, the Navajo were the largest in number (about 420). Their unusual achievement was kept a secret until 1968, when new technologies superseded Navajo code-talking and “the heroic story of the People could be told.” This powerfully illustrated large-format informational picture book provides the outline of both that story and the code itself, which used Navajo words to represent Roman letters, employing them as substitutes for English words, such as chay-da-gahi (“tortoise”) to mean “tank.” Illustrated samples are given in the text, but it still may not be enough for all readers to fully understand how the code worked. The somber pastel drawings are striking, and the ironic situation—a language once vilified that becomes an almost magical weapon—is made evident, but it is too bad readers aren’t given glimpses of the men who participated in this endeavor. The only people named are Philip Johnston, “an Anglo missionary’s son who had grown up with the Navajo” and who suggested the idea, and Marine Maj. Howard Connor, a white officer.

Once again, the individual Native Americans are lost in history.